Roll out the rain barrel 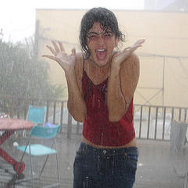 Free water Off-Gridders across the state of Colorado have been waiting a while for this moment – its now legal to gather rainwater off your roof, as long as it is 3,000 square feet or smaller.

But before we all have a barrel of fun, take note: the only people allowed to capture rain are those whose residences are well-ready with a well permit. The mere fact that you have no access to water, are not connected to the water grid, is not enough.

There is still a hill of rules you have to climb for fetching a pail of water.

State water officials acknowledged that they rarely enforced the old law. It was a bit like buying pot smoking paraaphenalia – stores rarely ask what you are planning to do with it. With the new laws, the state created a system of fines for rain catchers without a permit; previously the only option was to shut a collector down.

“It’s not going to be a situation where we’re sending out people to look in backyards,” Mr. Rein said.

From the State’s summary of the new law at water.state.co.us/pubs/pdf/RainWaterBills.pdf, in addition to having a home with a well, your permit for using it must be for domestic purposes. In many cases the permit outlines what you can use your water for; if you have restrictions on your well, you have to abide by those when using your rain harvest.

Thus, if you have a household-use only well, you can only use rainwater for “drinking and sanitary uses” within the home, according to the summary. Flushing toilets is in but greenhouse irrigation is out, and don’t even think about creating a decorative water feature with it. If you choose to drink, check with your local health department for tips on cleaning the water before consuming it.

You don’t actually need a well to do this; as long as you are approved for a well permit you can get your water from the sky. But only roof runoff can be collected, not water from puddles, pails in the yard, or drainage ditches. Hanging buckets in storm sewers is still a no-no. And whoever is collecting has to be the person whose name is on the permit for the well, so gathering rain from your neighbor’s roof while they’re on vacation is off-limits.

In good government fashion, if you meet all of the basic requirements and want to commence capturing, you have to apply for a collecting permit to go with the permit you already have for your well. In your application, you’ll have to outline in detail how you plan to go about gathering your raindrops.

If you want to collect, the Colorado Division of Water Resources are accepting applications; for details go to water.state.co.us.

30 million: Number of Westerners who get their water from the Colorado River.

7: Number of Western states that the Colorado and its tributaries travel through (Arizona, California, Colorado, Nevada, New Mexico, Utah, Wyoming).

5.2 trillion: Gallons of water allotted to those 7 states.

18 MILLION: Number of Californians whose water comes from the Colorado (about half the state’s population].

4 INCHES: Average rainfall in the majority of the river basin.

17 MILLION: Number of years ago that the Colorado started carving the Grand Canyon.

6 Responses to “Roll out the rain barrel”