As Seen On TV

How many times have you seen those wonderful gadgets advertised on TV? These infomercials tend to air early in the day, or late at night, enticing you to part with your hard earned money, if you would just order within the next 10 minutes, your life would be so much easier… but wait, there’s more!

I have to admit, I have some of these “As seen on TV” gadgets, and yes, sometimes they do make my life easier. I just received my latest gadget today, it’s called “Pump-n-Seal“. It basically pumps out the air (creates a vacuum) in jars, the really good thing about this is it doesn’t require electricity or batteries, and you can use recycled jars, you do not need to buy special jars or containers for this to work. This is perfect for the off gridder, I can reuse all sorts of glass jars, and it’s human powered. 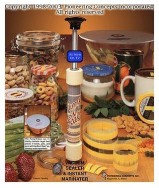 The first thing I did when I got it home was I found a clean, empty jar, it used to contain spaghetti sauce. Fortunately I am a major pack rat and I don’t throw anything away that may come in handy at a later date, so I have lots of glass jars with lids. I promptly took the push pin they give you, and punched a hole in the lid. Then I took one of the tab-cheks (no I didn’t misspell chek, that’s how THEY spell it), I placed the tab-chek over the hole, then made sure the lid was screwed down tight. I placed the pump on the lid and began to pump. I pumped and pumped, not sure how long I had to do it, once I thought I had done it enough, I removed the pump.

The little spot on the lid that pops up when the jar is opened the first time was indented, clue number one that the jar was properly sealed. Next I opened the jar, there was a satisfying pop when the seal was broken and the air rushed back in. clue number two that it works as advertised.

I replaced the lid and pumped the air out again, this time I will wait until tomorrow to see if it holds, I suspect it will with no problem. The only jars that will work with this are the ones that have the soft seal gasket in the lid, just look in the lid and look for the flat rubber ring in the lid. You can’t use jars that have a paper or plastic seal over the jar itself, the kind where you have to peel off the paper or plastic seal, you have to use jars with the gasket in the lid. 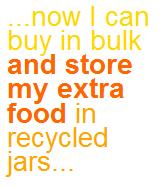 I have used other sealers, but these other ones needed special bags (read:EXPENSIVE), and you need to plug them into power, they are big. bulky and make a lot of noise. The Pump-n-Seal can be used on regular zipper baggies, but it looks like too much trouble to me, I will be using this on jars only.

Being off grid, and far from most stores, I need to be able to buy foods in bulk quantities, but still be able to eat the food after I have had it for a while. I can’t afford to waste food by allowing it to get rancid, stale, or allow insects or vermin to get into it. Now I can buy in bulk and be able to store my extra food in recycled jars, the foods will stay fresh longer, and no bugs can get in or live if they are already in it (flours and other cereal/grain foods generally already have weevil eggs in it, yucky but true). With no air, the bugs can’t live. And with no air, the foods will stay fresh much longer.

You can order this directly from the manufacturer, or do what I did, I ordered mine on eBay, just do a search for Pump n Seal, you will find them listed, the lady I purchased from is selling them new for $15.00 with free delivery, I don’t know how many she has, but as soon as one is sold, she lists another one. I have seen them listed used too, but I wouldn’t pay very much for a used one, especially if the shipping cost runs it up too high, remember you can buy them from the manufacturer for around $30.00, I wouldn’t pay more than $20.00 total, new or used, from eBay, you also want to make sure you get some tab-cheks, they aren’t much good without those, unless you want to try making your own. For those in the UK, there is someone currently (as of the day I wrote this) selling them on eBay too.

RELATED POST  They Really Had This Coming - NGOs splattered

I have read that you can make your own tab-cheks, I read this here: https://www.judyofthewoods.net/pump.html

“To make your own valves for next to nothing, cut a length of some sticky tape, such as electrical tape and place it sticky side up on the table. Cut a strip of polythene from a shopping bag (or bin bag or whatever source you have – it can be quite thin), about one third the width of the sticky tape and stick it along the center of the tape. Stick this strip onto some easy release paper, like baking paper, or the backing of some sticky labels (you did save it just in case?). That’s it. Cut a strip when required. Valves can be opened many times if the seal is lifted carefully and no particles get underneath.
It is advisable to use a tape with good adhesive qualities for more reliable storage. In my experience, electrical tape can vary enormously in quality and adhesion. 3M tape is top quality, if you can obtain it”

I recommend this, it’s small, portable, easy to use, human powered and you don’t need any special jars, just the ones you already have, this is especially good for off gridders!

For the record, here are the other “As seen on TV” gadgets I have and use.

I was just talking with my hubby about vacuums and heating, you can heat water inside vacuum tubes using the sun, they are very efficient, the water gets HOT and quickly, now I am wondering about using glass jars for solar cooking… maybe paint one side of the glass jar black (on the outside), put some food (or water) inside, put the lid on, pump out the air, then set it in the sun to heat up. Hmmm, I’ll have to give this a try, might not be able to paint the jar right away, but I can do the rest of it. If this works, or goes horribly wrong (grin), I’ll post a new message about it.

One Response to “As Seen On TV”